Human societies will transform to address climate change and other stressors. How they choose to transform will depend on what societal values they prioritize. Managed retreat can play a powerful role in expanding the range of possible futures that transformation could achieve and in articulating the values that shape those futures. Consideration of retreat raises tensions about what losses are unacceptable and what aspects of societies are maintained, purposefully altered, or allowed to change unaided. Here we integrate research on retreat, transformational adaptation, climate damages and losses, and design and decision support to chart a roadmap for strategic, managed retreat. At its core, this roadmap requires a fundamental reconceptualization of what it means for retreat to be strategic and managed. The questions raised are relevant to adaptation science and societies far beyond the remit of retreat. Evolving social norms, technologies, and economies will create futures that fundamentally differ from our world today. Climate change constrains the range of possible futures and affects the level of transformation societies will experience.

As the human population has grown, our demands on the ocean have increased rapidly. These demands have similarly increased the pressure we place on these systems, and we now cause considerable damage globally. If we want to maintain healthy ocean ecosystems into the future, we must learn to use ocean resources in a sustainable way and facilitate recovery in regions that have declined. Determining how to make these goals a reality, however, is no small challenge. Ingeman et al. review the challenge presented by attempting both to recover and to use ecosystems simultaneously and discuss several approaches for facilitating this essential dual goal. Ocean defaunation and loss of marine ecosystem services present an urgent need to recover degraded ocean ecosystems. Growing scientific awareness, strong regulations, and effective management have begun to fulfill the promise of recovery. Unfortunately, many efforts remain unsuccessful, in part because marine ecosystems and human societies are changing. Rapid shifts in environmental conditions are undermining previously effective recovery strategies. Moreover, divergent perceptions of recovery exist. Efforts toward reversing marine degradation must address the dynamic social-ecological landscape in which recoveries occur, or forever chase a moving target. Recovery efforts of tomorrow will require institutional and tactical flexibility to keep pace with a changing ocean, and an inclusive concept of recovery. Further, vital population-level efforts will be most successful when complemented by a broader ecosystem and social-ecological perspective. In this Review, we provide a synthesis of ocean-recovery goals as moving targets and highlight promising steps forward. While acknowledging the priority of basic conservation imperatives, successful recoveries can encompass a range of outcomes in the space between minimum ecological viability and maximum carrying capacity. Ongoing advances are improving our ability to predict the effects of environmental change on ocean productivity and to calibrate recovery targets to changing conditions. As a complement to predict-and-prescribe methods, research can also point the way toward robust approaches in the face of irreducible uncertainty. 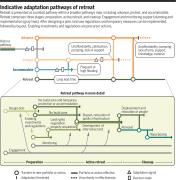 Climate-forced population displacement is among the greatest human rights issues of our time, presenting unprecedented challenges to communities and the governments responsible for protecting them. Sea level rise, heat, drought, and wildfires will cause people to move, losing homes and places they love, often with no ability to return. Indigenous Peoples have done the least to cause this crisis and face the loss of lands and connections to ancestral, cultural, and spiritual heritage. To ensure that their right to self-determination is protected and the horrific legacy of government-forced relocations is not repeated, communities must lead and define research on climate-forced displacement and managed retreat that involves them and the lands upon which they dwell and subsist. A focus on human rights, and decolonization of research to change institutional structures of knowledge production, can help communities define their future in a climate-altered world. The government responsibility to protect people may require relocation against peoples' will. Determining which communities are most likely to encounter displacement requires sophisticated assessment of the vulnerability of a community's ecosystem, but also its social, economic, and political structures. Human rights principles, which include rights to food, to safe and sanitary housing, and to water, must be embedded in any relocation governance framework. The right to self-determination ensures that communities make the decision of whether, when, and how relocation will occur and that cultural and spiritual heritage is protected if relocation is the best strategy. Human rights principles also ensure that racial and economic inequities, legacies of colonization and slavery, are addressed when responding to climate-forced displacement. Scholars continue colonization when Indigenous Tribes are not represented in, or consulted for permission to do, research on their communities and lands. Decolonization is the restoration of cultural practices, spirituality, and values that were taken away or abandoned through colonization and that are important for survival, well-being, and subsistence lifestyles. Decolonization advances and empowers Indigenous Peoples and stops perpetuating their subjugation and exploitation. Indigenous-led research can help determine whether inclusion of human rights protections averts or minimizes severe consequences associated with government-mandated relocation. For example, in a letter to the US National Science Foundation expressing concerns with its Navigating the New Arctic program, four Alaska Native organizations explained the danger and damage to their communities when outside academics define food security, resilience, and adaptation, highlighting the importance of Indigenous scholarship and voices in research.[*][1] Self-determination and decolonization mean that communities control the narrative about how the climate crisis affects them. Colonization continues when non-Indigenous scholars write narratives about “vanishing cultures.” The Alaska Native Science Commission and Inuit Circumpolar Council provide a promising model, having protocols that ensure Indigenous communities lead research efforts, defining the questions and methodologies. Non-Indigenous scholars need to build relationships and trust with Tribes before submitting funding applications to understand how skills offered by academic researchers can benefit and complement skills and expertise of Indigenous knowledge holders. Community-based environmental monitoring, and coproduction of knowledge, are important decolonizing tools that can facilitate empowerment and capacity building. Community-based monitoring is important to understand local ecosystem change, which is critical to implementing community-based adaptation strategies; global, regional, and national climate change assessments generally aggregate information above the level of resolution required for effective community policy. We reflect here on our experience in the North American Arctic and Subarctic, but such issues arise in communities around the globe. Countries such as Kiribati and Maldives face inundation from sea level rise, possibly leaving residents stateless. Sea level rise and extreme weather threaten lives and livelihoods in coastal communities in Egypt, Panama, and elsewhere. Research must support and build the capacity of Indigenous Tribes and local communities so that they have tools to respond dynamically to support adaptation that protects their human rights. [1]: #fn-1 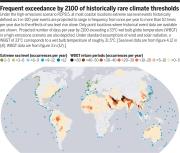