To learn who's taking home the Turing Award, people might turn to their trusted talking bots, like Siri or Alexa. Or, in fact, some of the very technology the three winners helped bring to life. Yoshua Bengio, Geoffrey Hinton and Yann LeCun have earned what's often referred to as the Nobel Prize of the tech world for their pioneering work in artificial intelligence, the Association for Computing Machinery announced Wednesday. The researchers, working both independently and together, helped advance the thinking and application of neural networks, the technology that gives computers the ability to recognize patterns, interpret language and glean insights from complex data. "Artificial intelligence is now one of the fastest-growing areas in all of science and one of the most talked-about topics in society," Cherri Pancake, president of the computing society, said in a statement.

Artificial intelligence has to go in new directions if it's to realize the machine equivalent of common sense, and three of its most prominent proponents are in violent agreement about exactly how to do that. Yoshua Bengio of Canada's MILA institute, Geoffrey Hinton of the University of Toronto, and Yann LeCun of Facebook, who have called themselves co-conspirators in the revival of the once-moribund field of "deep learning," took the stage Sunday night at the Hilton hotel in midtown Manhattan for the 34th annual conference of the Association for the Advancement of Artificial Intelligence. The three, who were dubbed the "godfathers" of deep learning by the conference, were being honored for having received last year's Turing Award for lifetime achievements in computing. Each of the three scientists got a half-hour to talk, and each one acknowledged numerous shortcomings in deep learning, things such as "adversarial examples," where an object recognition system can be tricked into misidentifying an object just by adding noise to a picture. "There's been a lot of talk of the negatives about deep learning," LeCun noted. 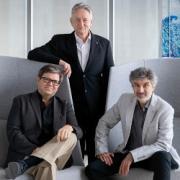 When Geoffrey Hinton started doing graduate student work on artificial intelligence at the University of Edinburgh in 1972, the idea that it could be achieved using neural networks that mimicked the human brain was in disrepute. Computer scientists Marvin Minsky and Seymour Papert had published a book in 1969 on Perceptrons, an early attempt at building a neural net, and it left people in the field with the impression that such devices were nonsense. "It didn't actually say that, but that's how the community interpreted the book," says Hinton who, along with Yoshua Bengio and Yann LeCun, will receive the 2018 ACM A.M. Turing award for their work that led deep neural networks to become an important component of today's computing. "People thought I was just completely crazy to be working on neural nets." Even in the 1980s, when Bengio and LeCun entered graduate school, neural nets were not seen as promising.

Last week, for the first time ever, RE•WORK brought together the'Godfathers of AI' to appear not only at the same event, but on a joint panel discussion. At the Deep Learning Summit in Montreal last week, we saw Yoshua Bengio, Yann LeCunand Geoffrey Hinton come together to share their most cutting edge research progressions as well as discussing the landscape of AI and the deep learning ecosystem in Canada. Joelle Pineau from McGill University who was moderating the discussion began by asking each pioneer to introduce their neighbour, which immediately generated a laugh from the packed auditorium. Yoshua kicked off by saying'here's Yann, I met him doing my masters and he was doing his post doc with Geoff and later Yann invited me to come and work with him and start working in convolutional neural networks, and it's still the hot thing today!' Yann went on to introduce Geoffrey and said'I'll be historical as well, when I was an undergrad I studied neural nets and realised there was no research published in the 70s. I saw a paper entitled Optimal Perceptual Inference and Geoff was one of the three authors.