The Chess Master and the Computer 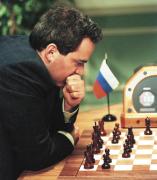 In 1985, in Hamburg, I played against thirty-two different chess computers at the same time in what is known as a simultaneous exhibition. I walked from one machine to the next, making my moves over a period of more than five hours. The four leading chess computer manufacturers had sent their top models, including eight named after me from the electronics firm Saitek. It illustrates the state of computer chess at the time that it didn't come as much of a surprise when I achieved a perfect 32–0 score, winning every game, although there was an uncomfortable moment. At one point I realized that I was drifting into trouble in a game against one of the "Kasparov" brand models. If this machine scored a win or even a draw, people would be quick to say that I had thrown the game to get PR for the company, so I had to intensify my efforts. Eventually I found a way to trick the machine with a sacrifice it should have refused. From the human perspective, or at least from my perspective, those were the good old days of man vs. machine chess.

Some methods of controlling the tree search in chess programs

If you have ever watched a person first learning to play chess, you know that a human chess player starts with very limited abilities. Once a player understands the basic rules that control each piece, he or she can "play" chess. However, the new player is not very good. Each early defeat comes as something of a surprise -- "Oh, I didn't think about that!" or "I didn't see that coming!" are common exclamations. The human mind absorbs these experiences, stores away different board configurations, discovers certain tricks and ploys, and generally soaks up the nuances of the game one move at a time.

Of particular interest to me is the earlier stages of development of computer chess programs, primarily through the 1970's (which I was involved in). The main contenders for best program from that era until today also has my interest, as does Kasparov and his "deep" involvement with computers.

In this paper we demonstrate how genetic algorithms can be used to reverse engineer an evaluation function's parameters for computer chess. Our results show that using an appropriate expert (or mentor), we can evolve a program that is on par with top tournament-playing chess programs, outperforming a two-time World Computer Chess Champion. This performance gain is achieved by evolving a program that mimics the behavior of a superior expert. The resulting evaluation function of the evolved program consists of a much smaller number of parameters than the expert's. The extended experimental results provided in this paper include a report of our successful participation in the 2008 World Computer Chess Championship. In principle, our expert-driven approach could be used in a wide range of problems for which appropriate experts are available.