Anthony Scaramucci listed as dead in Harvard directory, and the schadenfreude is sweet

As they say, when it rains it pours, and Anthony Scaramucci seems to be stuck outside in the middle of a monsoon without an umbrella. The former White House communications director blew up the internet with an explosive (and expletive-filled) New Yorker interview, had his wife file for divorce, and lost his job in President Donald Trump's administration all within 10 short days. What's more, he's also been incorrectly listed as dead by his alma mater. As fate would have it, the newest addition of the Harvard Law School alumni directory arrived this week, during Scaramucci's Shakespearean rise and fall, and he had an asterisk printed next to his name. This indicated he was reported dead since the directory was last published in 2011.

BOSTON – Harvard Law School apologized Monday after its new alumni directory erroneously listed ousted White House Communications Director Anthony Scaramucci as dead. The directory included an asterisk next to Scaramucci's name indicating that he had been reported dead since the previous edition was released in 2011. "Regrettably, there is an error in the Harvard Law School alumni directory in the listing for Anthony Scaramucci," Harvard Law spokeswoman Michelle Deakin said in a statement. "We offer our sincere apologies to Mr. Scaramucci. The error will be corrected in subsequent editions."

The effectiveness of a product especially software, relies on how organised the basic building blocks are. With Python being used for all complex mathematical and machine learning processes, the aspect of file finding and handling might seem trivial or unattractive from the birds eye view. But documentation becomes crucial when the content of the product has to be worked on by a different team. For instance, specific file documentations– these are usually generated through a third party script which will parse a file and, based on the comment blocks, will create an explicit PDF. Afterwards there should be information regarding the code repository, where the file updates are found, and where they need to be moved. 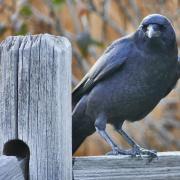 In my attempt to make an AI bird feeder, one of the biggest issues I ran into wasn't training or creating the image recognition model as I naively expected, but gathering enough high quality data that was formatted in the correct way. My first attempt at gathering bird images was to use a pre-existing data set from Kaggle. This is actually a really good option if the specific data set you are looking for is available. I was actually successful in finding a bird image data set, however there were way more birds than I wanted (I was only interested in birds I would find in my Texas backyard) and many specific birds that I did want, were missing. My next attempt was to scrape Google Images.