Quality of the is judged subjectivelyby how much the pseudo-colorresultresult resemblesthe true color image, by RMS quantizationerror, and by run time.

Location-Based Social Networks (LBSN) present so far the most vivid realization of the convergence of the physical and virtual social planes. In this work we propose a novel approach on modeling human activity and geographical areas by means of place categories. We apply a spectral clustering algorithm on areas and users of two metropolitan cities on a dataset sourced from the most vibrant LBSN, Foursquare. Our methodology allows the identification of user communities that visit similar categories of places and the comparison of urban neighborhoods within and across cities. We demonstrate how semantic information attached to places could be plausibly used as a modeling interface for applications such as recommender systems and digital tourist guides.

Clusters defined over a dataset by unsupervised clustering often present groupings which differ from the expected solution. This is primarily the case when some scarce knowledge of the problem exists beforehand that partially identifies desired characteristics of clusters. However conventional clustering algorithms are not defined to expect any supervision from the external world, as they are supposed to be completely unsupervised. As a result they can not benefit or effectively take into account available information about the use or properties of the clusters. In this paper we propose a reinforcement learning approach to address this problem where existing, unmodified unsupervised clustering algorithms are augmented in a way that the available sparse information is utilized to achieve more appropriate clusters. Our model works with any clustering algorithm, but the input to the algorithm, instead of being the original dataset, is a scaled version of the same, where the scaling factors are determined by the reinforcement learning algorithm.

From Clustering to Cluster Explanations via Neural Networks

A wealth of algorithms have been developed to extract natural cluster structure in data. Identifying this structure is desirable but not always sufficient: We may also want to understand why the data points have been assigned to a given cluster. Clustering algorithms do not offer a systematic answer to this simple question. Hence we propose a new framework that can, for the first time, explain cluster assignments in terms of input features in a comprehensive manner. It is based on the novel theoretical insight that clustering models can be rewritten as neural networks, or 'neuralized'. Predictions of the obtained networks can then be quickly and accurately attributed to the input features. Several showcases demonstrate the ability of our method to assess the quality of learned clusters and to extract novel insights from the analyzed data and representations. 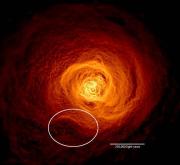 If you can imagine pouring cream into your coffee while you stir it, a plume, the eventual mix of the light and dark, and then apply that idea to space, you almost have a vague grip on the wave spanning the Perseus galaxy cluster. Then imagine it as large as two Milky Way galaxies. This wave was the product of a smaller galaxy cluster grazing the edge of the Perseus cluster, disrupting the gas and causing it to shift around. This all happened billions of years ago, but thanks to technology from NASA, we have an idea of what the wave looks like now, and how it has evolved over time. NASA's Chandra X-ray Observatory and other observations combined with computer simulations allowed researchers to create a mockup of what the wave would look like if it were visible.