The town of Norwood and the public school cafeteria have created a program to provide residents with over 400 ready to eat meals to its residents in need. Furloughed school workers prepare the meals on Tuesday and residents, who apply, can pick them up on Wednesday in the months of May and June.

A U.S. Customs and Border Protection officer thought he was being introduced to Irma Perez, a 30-something cafeteria worker at the San Ysidro Port of Entry, as a possible romantic connection. But she wanted something else from the officer: his cooperation smuggling unauthorized immigrants through his inspection lane. In exchange, he would be paid $4,000 per person. It's a scenario that has similarly played out across the U.S.-Mexico border for years, resulting in border corruption charges against numerous federal officers. However, this officer vowed he wouldn't be bribed.

Facebook worker living in garage to Zuckerberg: challenges are right outside your door

Mark Zuckerberg's travels throughout the United States to fulfill his 2017 "personal challenge" to "learn about people's hopes and challenges" have seen him drive a tractor, meet with recovering heroin addicts, don a hard hat and speak out against the staggering wealth inequality that his $68.5bn fortune so clearly represents. But to Nicole, a worker in one of Facebook's cafeterias, they have also raised an important question: "Is he going to come here?" "Here" is just a few miles from Zuckerberg's five-house compound in Palo Alto and mere blocks from Facebook's sprawling Menlo Park headquarters. Here, on a quiet street of modest bungalows, Nicole and her husband Victor, who also works at a Facebook cafeteria, live in a two-car garage with their children, ages nine, eight and four. "He doesn't have to go around the world," said Nicole.

Halperin discovered that Dubrow's, along with a few other cafeterias and automats in the city, was a unique and vanishing social institution, as well as a fertile ground for conversation and photography. Self-service cafeterias like Dubrow's offered cheap coffee and ready-made meals. Customers would grab trays, pick items as they proceeded down a counter, then look around to see where their friends were sitting.

'Spoon bandit' bathes in 1,500 spoons he 'stole' from school 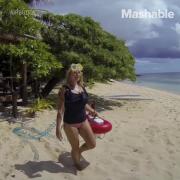