The design of an assembly system is a complex problem, often requiring large teams of engineers with significant experience and expertise. Based on studies of the product design, these teams must select an assembly sequence, generate a corresponding process plan, identify the resources capable of completing the tasks in the process plan, and group these resources into a system of workstations to accomplish the required assembly operations. The resulting system must be economically viable but have sufficient capacity to meet production requirements. The successful, timely design of such an assembly system depends on the team's ability to effectively share and communicate large volumes of information and have rapid feedback concerning cost, producibility, quality, and other important engineering criteria. Unfortunately, few available tools focus on fabrication or assembly: Those tools that do are often unable to share data. As a result, design teams are forced to do much of the work manually and are unable to effectively share information. Even large manufacturers find their teams spending considerable efforts just to enter the same data into multiple computer systems. Much work has been done to address various aspects of the assembly 136 HERNANDEZ, ET AL. As a result, much has been learned about these particular areas. However, little work has been done to integrate these systems.

Assembly plays a fundamental role in the manufacturing of most products. Parts that have been individually formed or machined to meet designed specifications are assembled into a configuration that achieves the functions of the final product or mechanism. The economic importance of assembly as a manufacturing process has led to extensive efforts to improve the efficiency and cost effectiveness of assembly operations. The sequence of mating operations that can be carried out to assemble a group of parts is constrained by the geometric and mechanical properties of the parts, their assembled configuration, and the stability of the resulting subassemblies. An approach to representation and reasoning about these sequences is described here and leads to several alternative explicit and implicit plan representations.

Apparently, one of the standards by which we should be measuring the progress of useful robotic manipulation is through the assembly of Ikea furniture. With its minimalistic and affordable Baltoscandian design coupled with questionably creditable promises of effortless assembly, Ikea has managed to convince generations of inexperienced and desperate young adults (myself included) that we can pretend to be grownups by buying and putting together our own furniture. It's never as easy as that infuritatingly calm little Ikea manual dude makes it look, though, and in terms of things we wish robots would solve, Ikea furniture assembly has ended up way higher on the priority list than maybe it should be. We've seen a variety of robotic systems tackle Ikea in the past, but today in Science Robotics is (perhaps for the first time) a mostly off-the-shelf system of a few arms and basic sensors that can put together the frame of a Stefan chair kit autonomously(ish) and from scratch. This research comes from the Control Robotics Intelligence (CRI) group at NTU in Singapore, and they've been working on the whole Ikea chair assembly thing for a while. 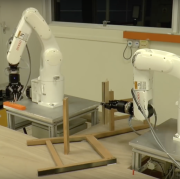 The stressful task of assembling flat-pack furniture looks set to become a thing of the past following the unveiling this week of a robot that can do it for you. Scientists at Nanyang Technological University, in Singapore, have created an android featuring a 3D camera and "industrial robot arms" with grippers that is capable of assembling furniture without human help, The Guardian reports. Tasked with constructing Ikea's £18 Stefan chair, two robots working together successfully assembled the chair in just nine minutes - faster than it would take most humans, the newspaper says. However, the scientists had previous spent around 11 minutes programming the robots to perform the assembly process. The team hope that, by integrating more artificial intelligence (AI) into the robots, they will one day be able to teach themselves how to build pieces of furniture by studying the instruction manual, looking at a picture of the finished item, or through verbal commands, the newspaper reports.