An Ostrich-Like Robot Pushes the Limits of Legged Locomotion

What looks like a tiny mechanical ostrich chasing after a car is actually a significant leap forward for robot-kind. The clever and simple two-legged robot, known as the Planar Elliptical Runner, was developed at the Institute for Human and Machine Cognition in Ocala, Florida, to explore how mechanical design can be used to enable sophisticated legged locomotion. A video produced by the researchers shows the robot being tested in a number of situations, including on a treadmill and running behind and alongside a car with a helping hand from an engineer. In contrast to many other legged robots, this one doesn't use sensors and a computer to help balance itself. Instead, its mechanical design provides dynamic stability as it runs.

Google Hasn't Given Up on Robots - Artificial Intelligence Online 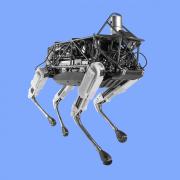 In 2014, Google went on a robot spending spree, buying a handful of companies working on various technologies to help robots see, walk, and grasp objects. It seemed that the company was intent on building advanced new robots that might transform factories and even our homes. But last week Bloomberg reported that Google wants to sell the most striking of the companies it acquired, Boston Dynamics. The company's impressive two- and four-legged robots were apparently too far from being marketable. Google has not given up on robots, but appears to have decided to be more realistic about what it can achieve.

#255: Learning about Legged Locomotion from Birds, with Monica Daley

In this episode, Audrow Nash speaks with Monica Daley about learning from birds about legged locomotion. To do this, Daley analyzes the gaits of guineafowl in various experiments to understand the mechanical principles underlying gaits, such as energetic economy, mechanical limits, and how the birds avoid injury. She then tests her ideas about legged locomotion on legged robots with collaborators, including Jonathan Hurst from Oregon State University. Daley also speaks about her experience with interdisciplinary collaborations.

Meet Hexa, a Six-Legged Insectile Robot That's Just As Creepy As It Sounds

The uncanny valley teems with creepy humanoids--machines not quite perfect enough to be mistaken for people, but not quite comically robotic enough to be endearing. Lately, they've been joined by robo-animals, like the mechanical dog from Boston Dynamics that not-at-all-unsettlingly regains its balance if you kick it. Now, a new robot is scuttling into the uncanny valley. Hexa has six legs, looks like a bug, and moves with bizarre confidence. And it just might bring robot hacking to the masses.