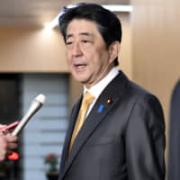 Japan will send a delegation of about 1,000 people to South Korea later this year, Toshihiro Nikai, secretary-general of the ruling Liberal Democratic Party, said Thursday. He unveiled the plans during talks in Tokyo with Kang Chang-il, head of a group of South Korean lawmakers promoting ties with Japan, according to a member of the group's Japanese counterpart who was present at the meeting. Nikai said he will lead the delegation, which will visit South Korea sometime after the end of the upcoming session of the Diet. The session is set to start Jan. 20 and end June 17. The Japanese and South Korean lawmakers agreed to work on improving bilateral relations, which have been strained over history and trade.

"The Government delegation has not yet arrived, the Special Envoy received a message that they are planning to arrive tomorrow, which is the 29th of November," U.N. spokeswoman Alessandra Vellucci told a news briefing in Geneva, declining to give details. "At least we know that they are coming."

A woman works at the Brazilian Laboratory of Doping Control during its inauguration before the 2016 Rio Olympics in Rio de Janeiro, Brazil, on May 9, 2016. Anti-doping agents from at least 10 nations are preparing to press Olympic leaders to ban the entire Russian delegation from the 2016 Summer Olympics in Brazil if allegations of a state-run doping scandal at the 2014 Winter Games are verified by an upcoming report, Reuters reported. The country's track and field team has already been barred from participation in the international competition. The controversy is ongoing as officials already are dealing with concerns over Zika, contaminated water sources and other problems, in Rio de Janeiro, Brazil. In a leaked draft letter to the International Olympic Committee, United States Anti-Doping Agency CEO Travis Tygart and Paul Melia, CEO of the Canadian Centre for Ethics in Sports, called for an expanded ban.

Michelle Lujan Grisham, Steve Pearce and Ben Ray Lujan advocate shifting the HH-60G helicopters to the 150th Special Operations Wing, a Kirtland-based Guard unit that currently doesn't have its own aircraft to operate.