How Fast Is The Universe Expanding? Conflicting Estimates Continue To Fuel Debate

That the universe is expanding is a well known fact. What is less well known is the rate at which this expansion is taking place. Initially, scientists had pegged the value of the Hubble Constant -- a unit that is used to measure the rate of universe's expansion and is named after the astronomer Edwin Hubble -- at roughly 43.7 miles per second per megaparsec (one megaparsec 3.26 million light-years). However, a study published on the preprint website arXiv in April cast doubts over the figure. The study, based on observations of thousands of Cepheid stars and hundreds of Type Ia supernovae, estimated, with an uncertainty of 2.4 percent, that the Hubble Constant is roughly 45.5 miles per second per megaparsec.

Stephen Hawking's final paper cuts the multiverse down to size

April 9, 2013: British cosmologist Stephen Hawking, who has motor neuron disease, gives a talk titled "A Brief History of Mine," to workers at Cedars-Sinai Medical Center in Los Angeles. Stephen Hawking's final paper, which aims to test a theory that proposes parallel universes, appeared today (May 2) in the Journal of High Energy Physics. As Live Science reported at length in March, before the paper was peer-reviewed and officially published, it shares Hawking's final look at one of his earliest theories, the so-called "no-boundary proposal." This idea describes the conditions in the very early universe. Hawking and his co-author, Thomas Hertog, a physicist at the Catholic University of Leuven in Belgium, attempted to resolve thorny questions regarding the multiverse, or the idea that many universes exist side by side.

No Man's Sky Lets You Explore a Universe-Sized Universe

If you budget just one second for each planet in Hello Games' imponderable No Man's Sky, you'll still spend 5 billion years visiting them all. By that time, our own sun will have become a crimson death star and swallowed us whole. You'll see virtually none of the more than 18 quintillion planets in this space survival game. Scrappy U.K.-based studio Hello Games wanted first to stir imaginations by crafting a digital universe almost as grand as our own. It's rendered on the fly by an absurdly small amount of mathematical code. 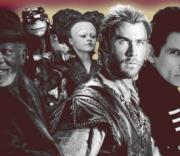 When studio investments in viewer brand loyalty hit the jackpot (as happened last year with The Force Awakens, Jurassic World, and most, if not all, of Disney's Marvel universe releases) they generate gushers of revenue for the entertainment conglomerates behind them, creating an incentive for other companies to make similar bets. But what happens when you don't have a Star Wars universe, a Marvel universe, or ginormous mutant dinosaurs, but you still need to present a safe-seeming slate of films to the board of directors in an age in which more and more (and better and better) entertainment options compete for audience eyeballs? Of course studios have an interest in seeking to create lasting franchises, even from movies that failed to stir most viewers' hearts the first time around. In fact, it's become commonplace for not only big-budget action tentpoles but run-of-the-mill genre films to serve as the wobbly foundations for would-be franchises--as was the case, for example, with the first Now You See Me, a modestly budgeted thriller about a team of stage-magician con artists that became a surprise hit in 2013. Though the original was greeted with the most tepid of backhanded compliments--one critic called it "an engaging B-movie" that "sadly degenerates into an overcomplicated mess"--the production companies behind Now You See Me, Lionsgate and Summit Entertainment, decided their new property had forged enough lasting viewer goodwill to justify a trilogy, whose middle chapter opens this weekend.

The Higgs boson may have stopped the early universe from collapsing

The Higgs boson may be key to understanding the first moments of the universe. If the early universe was too disordered, everything would have collapsed into black holes moments after the big bang. Luckily, this didn't happen, and some new calculations suggest the Higgs boson could be the reason why. Near the start of the beginning of the universe, everything was compressed into a very small space.