Shortly after launching its premium new Pixel phones, Google confirmed to The Verge that there are "no plans" to create another Nexus-branded device. The report was corroborated by the ruthless eradication of the Nexus 5X and 6P (among other devices) from the Google Store, and several tweets by the official Nexus account that said, in effect, so long and thanks for all the fish. As Nexus users, you've played an integral role in this journey for Google. We're excited about Pixel, and want you to know that (1/2) We'll continue to support Nexus (customer support, software updates, etc.) & @googlenexus will continue to be a place for Nexus convos (2/2) https://t.co/BhgVcH1P56 We'll continue to support current Nexus users; there aren't currently any plans for a future Nexus product.

Hardcore fans mourn the death of Nexus by denouncing the Pixel 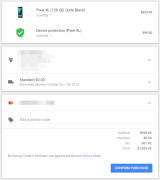 It seems Google would like people to think the Pixel is the first phone it has ever produced with its "Made by Google" ad campaign. The most devoted fans of the Android platform have never seen it that way. To them, the Nexus phones were about "pure Android," but now they're suddenly finding their phones have been demoted. Google has said there will be no new Nexus phones, and what's more, the Pixel and Pixel XL will get exclusive features that aren't coming to the current Nexus line, and Nexus owners are understandably upset. Well, we cannot reprint some of what's been said, if that gives you an idea.

Report: HTC-built Nexus 'Sailfish' leaks reveal the undercard in the next Nexus lineup

The summer months bring us something besides hot weather and vacations: Nexus phone rumors. So we're kicking things off right with a new set of specs from Android Police, which we've found to be one of the more accurate sources for such leaks. First, let's check out the rumored spec sheet of the device codenamed "Sailfish" (Google picks creatures of the sea for its Nexus devices). It's the smaller and presumably lower-end of the two rumored models: It all sounds reasonable, and keeps in line with previous rumors that HTC would build two Nexus phones. Yet it's not what's on this spec list that is more interesting.

While many Android phones are still waiting for the first taste of Nougat, Google is pushing ahead on the latest version of Android for its Nexus and Pixel devices. Available for users enrolled in the Android Beta Program, the next release is, according to Google's blog description, "an incremental maintenance release focused on refinements, so it includes a number of bug fixes and optimizations, along with a small number of enhancements for carriers and users." That means you probably won't see any differences in your day-to-day use, unless you were consistently bothered by a particular bug. However, if you happen to own a Nexus 6 or Nexus 9, you're out of luck. Not only is the device unable to install the beta, Google says that the general release of 7.1.2,

Android Nougat: Here's where to get the upgrade for your Nexus

Google has released the Android Nougat factory images for handsets including the Nexus 5X. If you want to upgrade your Nexus handset to Android Nougat you may be in luck. Google has posted the files needed to upgrade various Nexus handsets to the latest release of the mobile OS. While most Nexus owners should receive an over-the-air update to Nougat in the coming weeks, anyone keen to try out Nougat's new multitasking and other features sooner can shortcut the process by downloading the files from Google's developer site and manual installing them. Android 7.0 Nougat released: What to expect on the Nexus 6P Android's latest software is available starting today, if you own a compatible Nexus device.