The hype surrounding the Saturday night fight between boxer Floyd Mayweather Jr. and MMA fighter Conor McGregor is overtly racially charged. Because people are eating it up, says Wesley Morris, critic-at-large for the New York Times. Morris is the co-host of the Still Processing podcast.

Using the IT budgeting process to your advantage

IT budgeting can be a painful process. There's never enough money for all the organization's priorities, running day-to-day operations is costly, IT is now being tasked with digital innovation (whatever that means), and despite all this, there are usually demands to trim the budget year over year. It all seems like a process that should be completed as quickly as possible to move on to the "real work." However, that would be a costly mistake. Willie Sutton, the famous bank robber, was supposedly asked by a reporter why he robbed banks, to which he responded, "That's where the money was." (Apparently the quote was fabricated by the reporter, but Sutton later used it, including it in an autobiography title.)

US Open: Nadal-Anderson Seems a Mismatch, but Upsets Happen

Sure, the 6-foot-8 (2.03-meter) Anderson, the tallest Grand Slam finalist in history, is equipped with a booming serve -- he's been broken only five times across 108 service games over the past two weeks -- and so, in theory, the South African could make Nadal uncomfortable. Although even that seems unlikely, given that the 6-foot-1 (1.85-meter) Nadal is among the game's top returners and has won 43 percent of his opponents' service games in the tournament.

Judge: No rejecting Georgia mail ballots due to signature mismatch 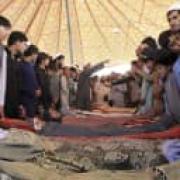 ATLANTA – Georgia election officials must stop rejecting absentee ballots and absentee ballot applications because of a mismatched signature without first giving voters a chance to fix the problem, a federal judge ruled Wednesday. U.S. District Judge Leigh May ordered the secretary of state's office to instruct county election officials to stop the practice for the November midterm elections. She outlined a procedure to allow voters to resolve alleged signature discrepancies. Two lawsuits filed earlier this month allege that election officials are improperly rejecting absentee ballots and applications in violation of their constitutional rights. The lawyers behind both lawsuits had filed emergency requests asking May to make certain immediate changes while the litigation is pending.

Say you live in Georgia. You're eager to vote in this year's election--a tight race between Democrat Stacey Abrams and Republican Trump acolyte Brian Kemp--so you fill out an absentee ballot and mail it in. Then, days or weeks after the election, you receive a notice in the mail. The signature on your absentee ballot, it explains, looked different from the signature on your voter-registration card. So an election official threw out your ballot.