John D. ("Jack") Roberts, Professor of Chemistry, Emeritus, at the California Institute of Technology (Caltech), died on 29 October at the age of 98. Roberts led organic chemistry's transition from a field that studied what reactions did to one that also studied how reactions happened. He was an explorer with boundless curiosity who was untiring in his efforts to bring new and useful ideas, tools, and experimental designs to chemistry. He thrived on convincing chemists that his opinions on both science and scientific standards were correct (or at least worth arguing about, usually strenuously). He was not the only parent of physical-organic chemistry, but he was its best teacher. 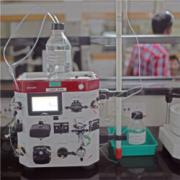 Simple robots have been part of chemistry for years. Chemistry is a sort of applied physics, with the behavior of electrons and their orbitals dictating a set of rules for which reactions can take place and what products will remain stable.

Thoughts on an Unified Framework for Artificial Chemistries

Artificial Chemistries (ACs) are symbolic chemical metaphors for the exploration of Artificial Life, with specific focus on the problem of biogenesis or the origin of life. This paper presents authors thoughts towards defining a unified framework to characterize and classify symbolic artificial chemistries by devising appropriate formalism to capture semantic and organizational information. We identify three basic high level abstractions in initial proposal for this framework viz., information, computation, and communication. We present an analysis of two important notions of information, namely, Shannon's Entropy and Algorithmic Information, and discuss inductive and deductive approaches for defining the framework.

Industrial applications of photocatalysis have remained elusive, and perhaps the simplest explanation is that the cost-to-benefit ratio of triggering a chemical reaction by using light usually pales in comparison to a purely thermal driven process. For many years, the conversion cycle of sunlight into chemical energy was strictly confined to the involvement of materials such as titanium dioxide and zinc oxide, well-known photocatalysts whose light absorption poorly overlaps the solar spectrum. More recently, however, plasmonic nanoparticles have been reported that can drive photoreactions and can be engineered to operate efficiently across the ultraviolet, visible, and infrared regions of the electromagnetic spectrum. On page 69 of this issue, Zhou et al. (1) demonstrate that by illuminating a plasmonic metal nanoparticle, the resulting hot-carriers that are produced can reduce the activation barrier of a chemical reaction by exciting the adsorbed molecules, either electronically or vibrationally. The study proves this for a model system, unlocking the rate limiting step--the kinetic bottleneck--for ammonia decomposition onto a copper-ruthenium alloyed catalyst.

Chemistry is a sort of applied physics, with the behavior of electrons and their orbitals dictating a set of rules for which reactions can take place and what products will remain stable. At a very rough level, the basics of these rules are simple enough that experienced chemists can keep them all in their brain and intuit how to fit together pieces in a way that ultimately produces the starting material they want. Unfortunately, there are some parts of the chemical landscape that we don't have much experience with, and strange things sometimes happen when intuition meets a reaction flask. This is why some critical drugs still have to be purified from biological sources. It's possible to get more precise than intuition, but that generally requires full quantum-level simulations run on a cluster, and even these don't always capture some of the quirks that come about because of things like choice of solvents and reaction temperatures or the presence of minor contaminants.