Climate-conscious investors are preparing to deliver two top U.S. energy companies an unprecedented rebuke at annual shareholder meetings Wednesday. A month after world leaders came together to sign the historic Paris Agreement, cementing a promise to keep the Earth from warming more than 2 degrees Celsius, a record number of shareholder groups have backed proposals that would require Exxon Mobil and Chevron to say how they would adjust to that reality. To date, America's largest two energy companies by market share have given the cold shoulder to demands that they outline potential business impacts of policies designed to stave off catastrophic global warming, such as carbon taxes and emissions caps. "The board is confident that the company's robust planning and investment processes adequately contemplate and address climate change related risks," Exxon told shareholders in a letter advising them to vote against the proposal there. "Such a report is unnecessary in light of the safeguards and oversight in place through Chevron's business and project planning and enterprise risk management tools and processes," Chevron wrote, adding that disclosure could put the company at a competitive disadvantage.

GE Powered the American Century---Then It Burned Out 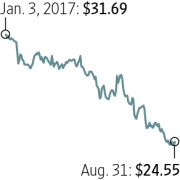 Just an hour's drive from New York City or a short flight from Boston, Crotonville, N.Y., is the home of GE's management academy, famed for culling and cultivating a cadre of leaders the company saw as its most valuable product. Crotonville is where Jack Welch, GE's larger-than-life former chief executive, held his lecture sessions in "The Pit," a large sunken auditorium where he coached the future CEOs of companies such as Boeing and Home Depot . Welch remade and expanded the campus during his two decades running GE. Join WSJ journalists in a live subscriber-only call on what happened at GE, how they got the inside story and what it all means. Register at wsj.com/gecall, and send your questions on GE to subscribercall@wsj.com. Opened in 1956, the 60-acre property is half conference center, half country retreat. Welch and other GE bosses would visit nearly every month to lead programs for middle managers, customers and executives from other companies who wanted to learn the GE leadership magic. For the 300,000 people who work at GE, a trip to Crotonville is an ardent desire and a treasured accomplishment. This pilgrimage in August 2017 was different. The stock price had been slumping, and longtime CEO Jeff Immelt had just stepped down after a frustratingly middling 16-year tenure. The new boss, John Flannery, had started a monthslong review of every corner of America's last great industrial conglomerate. On that summer afternoon, the auditorium buzzed with whispers of what was ahead. No one doubted the 125-year-old company's ability to rise again. Then Jeff Bornstein started talking. The gruff, 52-year-old chief financial officer had lost out on the top job weeks earlier, but had committed to staying on to help the new CEO navigate the company's complicated structure. Bornstein launched into an exhortation: Run the company like you own it. Be the leaders General Electric bred you to be. You should all be accountable for every prediction made and every target missed. "I love this company," he said. Then, he stopped and took a breath--deep and racked. He started again and stopped again. Jeff Bornstein, the shark-fishing, nicotine-gum-chomping, weightlifting CFO, was crying. A Maine native, Bornstein had come to GE after college, eventually serving as finance chief of the lending arm, GE Capital, where he helped stave off the worst damage of the financial crisis. His rivals within the company found him blunt to a fault, willing to chastise or demean in public and private. He served as a counterbalance to Immelt's relentless optimism, and his finance chops brought him the respect of Wall Street. If this guy was fighting back tears, something must be seriously wrong. In the first six months of 2017, GE had earned hardly any of the $12 billion in cash it projected for the year. It would need at least $8 billion just to cover the dividends it had promised stockholders.

The Cassini spacecraft spent 13 years orbiting Saturn; as it ran low on fuel, the trajectory was changed to sample regions it had not yet visited. A series of orbits close to the rings was followed by a Grand Finale orbit, which took the spacecraft through the gap between Saturn and its rings before the spacecraft was destroyed when it entered the planet's upper atmosphere. Dougherty et al. measured the magnetic field close to Saturn, which implies a complex multilayer dynamo process inside the planet. Roussos et al. detected an additional radiation belt trapped within the rings, sustained by the radioactive decay of free neutrons. Lamy et al. present plasma measurements taken as Cassini flew through regions emitting kilometric radiation, connected to the planet's aurorae. Hsu et al. determined the composition of large, solid dust particles falling from the rings into the planet, whereas Mitchell et al. investigated the smaller dust nanograins and show how they interact with the planet's upper atmosphere. Finally, Waite et al. identified molecules in the infalling material and directly measured the composition of Saturn's atmosphere. Starting on 26 April 2017, the Grand Finale phase of the Cassini mission took the spacecraft through the gap between Saturn's atmosphere and the inner edge of its innermost ring (the D-ring) 22 times, ending with a final plunge into the atmosphere on 15 September 2017. This phase offered an opportunity to investigate Saturn's internal magnetic field and the electromagnetic environment between the planet and its rings. The internal magnetic field is a diagnostic of interior structure, dynamics, and evolution of the host planet.

Chemical interactions between Saturns atmosphere and its rings

INMS has unitary mass resolution. The y axis is in counts per integration period (IP, 31 ms) integrated over the closest-approach data.

U.S. energy companies are facing a brutal earnings season this spring as low oil and natural gas prices continue to hack away at revenue and hamper spending. Earnings growth for the sector could fall by about 100 percent in the first quarter from the same period last year, S&P Global Market Intelligence said this week in a survey of energy firms listed on the Standard & Poor's 500 index. Total earnings growth for the S&P 500 is expected to drop only about 7.5 percent for the quarter. The plunge in energy sector earnings might sound dramatic, but analysts said the numbers aren't exactly surprising, given that many U.S. oil and gas producers are no longer profitable. Crude prices have tumbled precipitously over the last 20 months on fears that global oil supplies are surging ahead of worldwide demand.