Subliminal messages can make you forget memories without realising

If you try not to remember something, it really can become more difficult to recall it in future. Now a study of intentional forgetting has found that we can be told to forget things on purpose, and this can happen subliminally, without you even realising. We already knew that people can consciously suppress memories when asked to. A previous experiment used visual cues to tell volunteers to remember or forget words while they tried to learn a variety of word pairs.

Turkish officials reject the criticism, saying the extent of the crackdown is justified by the gravity of the threat to the Turkish state in the wake of the coup attempt, when soldiers commandeered tanks and fighter jets, bombing parliament and other key buildings in an attempt to seize power.

The ability to delay intentions and remember them in the proper context is an important ability for general artificial agents. In this paper, we define the functional requirements of an agent capable of fulfilling delayed intentions with its long-term memories. We show that the long-term memories of different cognitive architec- tures share similar functional properties and that these mechanisms can be used to support delayed intentions. Finally, we do a preliminary evaluation of the different memories for fulfilling delayed intentions and show that there are trade-offs between memory types that warrant further research. 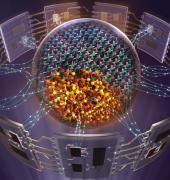 One of the main stumbling blocks in using artificial intelligence to glean insights from large datasets is that most computer systems aren't designed to handle these kinds of resource-intensive workloads. IBM Corp. researchers are trying to overcome these deficiencies with a new hybrid concept that could, in theory, make it much easier to perform analytics and train artificial intelligence systems. In a paper published Tuesday in the Nature Electronics journal, IBM's researchers noted that most of today's computers are based on what's called the "von Neumann architecture," which requires that data is transferred between memory and processing units in order to be processed. But this is an inefficient process, IBM argues. To remedy this problem, IBM has come up with a new concept called "mixed-precision in-memory computing," which integrates a computational memory unit with a von Neumann machine.

The memory capac1ty Is found to be much smal1er than the Kosko upper bound, which Is the lesser of the two dimensions of the BAM. On the average, a 64x64 BAM has about 68 %of the capacity of the corresponding Hopfield memory with the same number of neurons.