As Singapore currently has one of the highest rates of card fraud in the world, in order to combat this, in 2017 Singapore's financial industry came together to commit to data analytics as a means of fighting financial crime. As such, Featurespace's technological platform uses machine learning to detect anomalies in individual behaviour for fraud and risk management, and it was developed by computer scientists in the laboratories of Cambridge University. The real-time ARIC platform uses Adaptive Behavioural Analytics to self-learn and continuously respond to new customer data. By understanding the behaviour of each individual banking and credit card customer, ARIC identifies new and known attacks, while blocking fraud at the moment it occurs. ARIC reduces false positives, by 70%, increasing revenue, and reducing customer friction.

Drones are now being trained to spot violent people in crowds

Get your Minority Report or Skynet references ready, researchers at the University of Cambridge are working on a way to use AI and drone surveillance to spot violent behavior in crowds. The research paper even has a cool sci-fi name: Eye in the Sky. The project uses an inexpensive Parrot AR 2.0 drone to watch crowds of people from above. Then it uses AI to identify people in violent poses (the paper mentions strangling, punching, kicking, shooting and stabbing). It's important to note that the researchers didn't fly a drone around to detect real violence -- The Verge reports it shot its own video clips using volunteers.

Police at the "front line" of difficult risk-based judgements are trialling an AI system trained by University of Cambridge criminologists to give guidance using the outcomes of five years of criminal histories.

Experts at the University of Cambridge have warned that rogue states and terrorists could turn to artificial intelligence (AI) to destabilise the world.

"For many decades hype outstripped fact in terms of AI and machine learning.

Facial recognition could soon be used to identify masked protesters

"V for Vendetta" masks are a typical feature of many political protests since the eponymous dystopian movie came out in 2005 -- but what if facial recognition technology was able to identify the face behind the mask? SEE ALSO: Why the iPhone 8's facial recognition could be a privacy disaster We're not there yet, but researchers are slowly and steadily making highly-controversial steps in this direction. Academics from Cambridge University, India's National Institute of Technology, and the Indian Institute of Science used deep learning and a dataset of pictures of people in disguise to try to identify masked faces with an acceptable level of reliability. The research, published on the preprint server arXiv and shared in an AI newsletter, went viral after prominent academic and sociologist Zeynep Tufekci shared it on Twitter. Stressing that the paper "isn't that great", Tufekci nonetheless points out that it's the direction that's worrying, as oppressive and authoritarian states could use the tool to stifle dissent and expose anonymous protesters.

Cops are now using AI to predict crime before it happens

In a timely reminder that we're pretty much living in a sci-fi future that writers from the 1950s could only have dreamed of, law enforcement officers in the UK are now turning to AI to predict future crime. But before you go daydreaming of Minority Report-style "precogs" swimming in vats of strange blue liquid, you should know that this system is a bit different than the one Tom Cruise was so adapt at utilizing. The system, called HART (short for Harm Assessment Risk Tool), is built specifically to form an opinion about current offenders and offer police a guess as to whether or not they're going to reoffend to become an even bigger problem down the road. It was built by a University of Cambridge professor in partnership with other agencies and institutions, and it uses a three-tiered "risk category" system to assign arrested suspects with either a high, medium, or low risk label. The advanced tool utilizes a total of 34 different predictors including age, IQ, and gender, and most notably does not factor race into account whatsoever.

BRITISH cops are using a system to stop crimes BEFORE they happen. Police in Durham are employing artificial intelligence designed to help officers decide whether or not to keep a suspect in custody. Dubbed the Harm Assessment Risk Tool (HART), it predicts the risk of the suspect re-offending by categorising them as low, medium or high risk. The force says the system is due to go live in the next few months, and could be picked up elsewhere in the country before the end of the year. HART is a system developed by University of Cambridge Professor Dr Geoffrey Barnes in a partnership between Durham Constabulary and the University of Cambridge's Centre for Evidence-Based Policing.

Every single movie coming out this summer 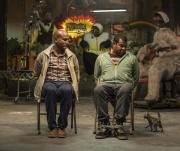 The 2016 Summer Movie Preview is a snapshot of the films opening through early September. Release dates and other details, as compiled by Kevin Crust, are subject to change. The view of Earth from space and the information it reveals about humanity's effect on the planet are examined in this large-format science documentary. Business suddenly picks up for a London kosher baker when his young Muslim apprentice accidentally drops a stash of pot into the mixer. Written by Yehudah Jez Freedman and Jonathan Benson. The kidnapping of a beloved kitty forces two naive cousins to infiltrate a street gang. Written by Peele & Alex Rubens. In 1913 Cambridge, England, a young Indian math genius joins forces with an eccentric professor. Written and directed by Matthew Brown. Written by Lily Hollander, Anya Kochoff Romano. After an auto accident, a young woman finds herself in a life at odds with the one she remembers. Written by Doc Pedrolie and Victoria Arch. The famous writer's downward spiral is witnessed by a young reporter during the revolution. With Minka Kelly, Giovanni Ribisi, Joely Richardson, Adrian Sparks. A lonely lombax and a tiny robot team with the Galactic Rangers to save their world in this animated adventure.