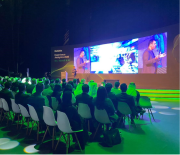 Deloitte today launched its Middle East inaugural Experience Analytics event in Dubai at Dubai Studio City. Experience Analytics is a globally recognised Deloitte event and has previously taken place in London, Amsterdam and Berlin. The theme is'Me, Myself, and AI' and brings together a combination of technology showcases and practical sessions that explore a number of topics across Analytics and Artificial Intelligence. It is not about people vs. machines but about how human collaboration and decision-making can be enhanced through the use of machines – this has been coined by Deloitte as the "Age of With". "We believe that we are entering an important phase for society in the Age of With, and in order to make a true impact that matters, we understand how important it is to collaborate and leverage our relationships with our alliances and eco-system partners to build the best solutions for our clients. Some of our global alliance partners for the event are Google, SAP, Informatica and Cloudera," said Rajeev Lalwani, Deloitte's Leader for Strategy, Analytics and M&A in the Middle East.

Over the past half a decade or so, artificial intelligence has become one of the world's most important emerging technologies, and although it is yet to go mainstream, its eventual adoption is inevitable. It might have originated in the United States, but knowing the full scope of AI, many others are now jumping in and developing their capabilities accordingly. One of those is the United Arab Emirates, and over the years, the region's policymakers have shown tremendous eagerness to welcome new technology. Dubai is all set to host the highly influential Artelligence Forum from 4th to 5th September next month, and there is no doubt that it is going to be a high-profile affair. Around 300 representatives from among governments and the world of business as well as tech are slated to attend the forum.

The Artificial Intelligence Week Middle East conference has wrapped up in Dubai, with PwC and Accenture among the sponsors and exhibitors featuring at the two-day event. Covering the banking & finance, government, and healthcare sectors, the Artificial Intelligence Week Middle East conference was held over the 4th and the 5th at the Park Hyatt in Dubai, featuring exhibitions, networking, pitches, and talks from some of the regional leaders in the field, including Xavier Anglada, Accenture Digital Lead for MENAT, and Stephen Anderson, Clients & Markets Leader for PwC Middle East. PwC in the Middle East, the event's official AI Consulting Sponsor & Partner, presented its recent annual AI report for the delegates in attendance, outlining the projected $96 billion boost to the United Arab Emirates' GDP by 2030 through the implementation of AI technologies – part of the $15.7 trillion possible worldwide windfall, and representing a 13.6 percent contribution to the UAE's overall GDP. Accenture – the AI event's Lead Digital Transformation Partner – has itself predicted huge gains for the UAE economy through AI adoption, amounting to some $182 billion in gross value add by 2030, while Accenture and PwC between them point to sizeable potential opportunities in the financial services, utilities, healthcare, education, transport, manufacturing and retail sectors. Unsurprisingly perhaps, consumer goods CEOs in the UAE are among the world's most enthusiastic for AI according to a further recent report by KPMG.And not just consumer goods CEOs in the UAE, but both wider industry and the government and public spheres are ready to embrace artificial intelligence – at least, if the line-up of AI tech conferences being held in the Emirates is anything to go by, with among others the Artelligence Forum having taken place in Dubai in April and the World AI show scheduled again in the city for April of next year.