Ultra-creepy technology that George Orwell could not have imagined in his most terrifying nightmares is invading government-school classrooms -- and children's minds -- all around the world. While many of the Big Brother innovations are coming out of Communist China, they are making their way into American schools quickly as well. In a video report by the Wall Street Journal on artificial intelligence in Communist Chinese schools, children in a communist indoctrination camp masquerading as a school are shown wearing bands around their heads. The devices feature colored lights on the front that indicate for the "teacher" whether the child is paying attention or distracted. Red is for "deeply focused."

Toxic man-made mercury pollution has been discovered in the deepest part of the ocean, in the Marianas Trench -- more than six miles below the surface. Researchers from China and the US used submarine robots to identify mercury in the fish and crustaceans living in the deepest part of the western Pacific Ocean. Mercury enters the atmosphere through the burning of fossil fuels, mining and manufacturing. It can then be transported into the oceans via rainfall. The liquid metal -- which was once used in thermometers before being banned -- is highly toxic and can be ingested via polluted seafood. 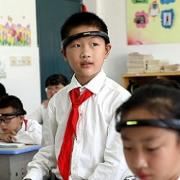 Headbands developed by BrainCo measure electric signals from neurons in the brain and translate that into an attention score using an algorithm. These days, many students at Jinhua Xiaoshun Primary School in eastern China begin their lessons not by opening textbooks, but by putting on headbands. The headbands, developed by startup BrainCo Inc. of Somerville, Mass., use three electrodes -- one on the forehead and two behind the ears -- to detect electrical activity in the brain, sending the data to a teacher's computer. Software generates real-time alerts about students' attention levels and gives an analysis at the end of each class. The pilot project, designed to help teachers keep tabs on and improve students' attentiveness, offers a glimpse into an artificial-intelligence boom in classrooms across China.

"As a doctor, it is my duty to evaluate the situation with as much data as I can gather and as much expertise as I have and as much experience as I have to determine whether or not the wish of the patient is medically justified" This quote would be so great and remarquable today in the time of big data and digital health revolution if it would not have be written by Dr Jack Kevorkian, better known as "Dr. But in my opinion he was more than right regarding the data he would be able to gather alongside his expertise and experience but it should have be used to cure and save lives, not to do euthanasia. Today too many people and quite often doctors themselves are feeding a competition or even a fight between Big Data and especially Artificial Intelligence and Healthcare Practitioners. What should end up into a major and seamless collaboration between today's fast moving health technologies including AI in particular and doctors, is unfortunately starting with such unnecessary egocentric time consuming and time wasting discussions and fights. In Beijing on 30th of June 2018, an artificial intelligence (AI) system scored 2:0 against elite human physicians in two rounds of competitions in diagnosing brain tumors and predicting hematoma expansion in Beijing. The BioMind AI system, developed by the Artificial Intelligence Research Centre for Neurological Disorders at the Beijing Tiantan Hospital and a research team from the Capital Medical University, made correct diagnoses in 87 percent of 225 cases in about 15 minutes, while a team of 15 senior doctors only achieved 66-percent accuracy in 30 minutes. The AI also gave correct predictions in 83 percent of brain hematoma expansion cases in 3 minutes, outperforming the 63-percent accuracy in 20 minutes among a group of physicians from renowned hospitals across the country. The outcomes for human physicians were quite normal and even better than the average accuracy in ordinary hospitals, said Gao Peiyi, head of the radiology department at Tiantan Hospital, a leading institution on neurology and neurosurgery. To train the AI, developers fed it with tens of thousands of images of nervous system-related diseases that the Tiantan Hospital has archived over the past 10 years, making it capable of diagnosing common neurological diseases such as meningioma and glioma with an accuracy rate of over 90 percent, comparable to that of a senior doctor. All the cases were real and contributed by the hospital, but never used as training material for the AI, according to the organizer. Wang Yongjun, executive vice president of the Tiantan Hospital, said that he personally did not care very much about who won, because the contest was never intended to pit humans against technology but to help doctors learn and improve through interactions with technology. "I hope through this competition, doctors can experience the power of artificial intelligence. 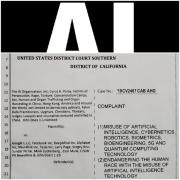 This is phase 1 of first lawsuit. We are open for support at a global level. We have a network of thousands around the world and tens of thousands in China, who are witnesses and have been harmed in China from the defendants technology and data transfer.The following are Federal Case Compliant Summary Facts Extracted from the official document filed in San Diego, California. To find out details of financial, personal and corrective behavioral demands, you may access the case in the federal court data base.

While a large body of research has formally identified apolipoprotein E (APOE) as a major genetic risk marker for Alzheimer disease, accumulating evidence supports the notion that other risk markers may exist. The traditional Alzheimer-specific signature analysis methods, however, have not been able to make full use of rich protein expression data, especially the interaction between attributes. This paper develops a novel feature selection method to identify pathogenic factors of Alzheimer disease using the proteomic and clinical data. This approach has taken the weights of network nodes as the importance order of signaling protein expression values. After generating and evaluating the candidate subset, the method helps to select an optimal subset of proteins that achieved an accuracy greater than 90%, which is superior to traditional machine learning methods for clinical Alzheimer disease diagnosis. Besides identifying a proteomic risk marker and further reinforce the link between metabolic risk factors and Alzheimer disease, this paper also suggests that apidonectin-linked pathways are a possible therapeutic drug target.

Here is our annual list of technological advances that we believe will make a real difference in solving important problems. We avoid the one-off tricks, the overhyped new gadgets. Instead we look for those breakthroughs that will truly change how we live and work. We're excited to announce that with this year's list we're also launching our very first editorial podcast, Deep Tech, which will explore the the people, places, and ideas featured in our most ambitious journalism. Later this year, Dutch researchers will complete a quantum internet between Delft and the Hague. An internet based on quantum physics will soon enable inherently secure communication. A team led by Stephanie Wehner, at Delft University of Technology, is building a network connecting four cities in the Netherlands entirely by means of quantum technology.

In the big data era, many organizations face the dilemma of data sharing. Regular data sharing is often necessary for human-centered discussion and communication, especially in medical scenarios. However, unprotected data sharing may also lead to data leakage. Inspired by adversarial attack, we propose a method for data encryption, so that for human beings the encrypted data look identical to the original version, but for machine learning methods they are misleading. To show the effectiveness of our method, we collaborate with the Beijing Tiantan Hospital, which has a world leading neurological center. We invite $3$ doctors to manually inspect our encryption method based on real world medical images. The results show that the encrypted images can be used for diagnosis by the doctors, but not by machine learning methods.

Spiking Neural Network (SNN), as a brain-inspired machine learning algorithm, is closer to the computing mechanism of human brain and more suitable to reveal the essence of intelligence compared with Artificial Neural Networks (ANN), attracting more and more attention in recent years. In addition, the information processed by SNN is in the form of discrete spikes, which makes SNN have low power consumption characteristics. In this paper, we propose an efficient and strong unsupervised SNN named BioSNet with high biological plausibility to handle image classification tasks. In BioSNet, we propose a new biomimetic spiking neuron model named MRON inspired by 'recognition memory' in the human brain, design an efficient and robust network architecture corresponding to biological characteristics of the human brain as well, and extend the traditional voting mechanism to the Vote-for-All (VFA) decoding layer so as to reduce information loss during decoding. Simulation results show that BioSNet not only achieves state-of-the-art unsupervised classification accuracy on MNIST/EMNIST data sets, but also exhibits superior learning efficiency and high robustness. Specifically, the BioSNet trained with only dozens of samples per class can achieve a favorable classification accuracy over 80% and randomly deleting even 95% of synapses or neurons in the BioSNet only leads to slight performance degradation.