British Airways has introduced advanced neural networks, known as artificial intelligence, to its airside operation at Heathrow Terminal 5. The new system is designed to help staff ensure every flight departs safely and on time. Currently, when customers disembark an aircraft, British Airways' ground staff manually check and record the details of eighteen different activities that need to be completed before the plane can depart for its next flight - including thorough cleaning of the aircraft interiors, unloading and reloading of catering, luggage and cargo and refuelling. An issue affecting just one of these tasks has the potential to disrupt the entire process and delay the flight's departure. Now, using a network of cameras set up around the aircraft stand by technology start-up Assaia, an alumni of British Airways' parent company IAG's Hangar 51 start-up accelerator programme, artificial intelligence is employed to compare live footage of the complex turnaround process with the proposed schedule.

Detectives have launched an investigation after three drones disrupted flights at an airport during a nearby music festival. Leicestershire police said a pilot of one of the unmanned aerial vehicles (UAVs) had been interviewed by officers after it was reported to police at 9.30am on Saturday near the Download festival at Donington Park. Two further drones were reported inside the restricted airspace at East Midlands airport at midnight and on Sunday at 1.30pm. Flights were delayed at the airport as a result of the drones. Police said they had carried out inquiries in conjunction with the Civil Aviation Authority and East Midlands airport. 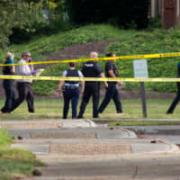 LONDON - Climate activists from Extinction Rebellion have drawn up plans to use drones to shut London's Heathrow Airport this summer in a campaign to stop the construction of a third runway at Europe's busiest airport, the group said. The internal proposal, seen by Reuters, emerged against a backdrop of renewed campaigning by environmental groups who argue that expanding Heathrow would be incompatible with Britain's targets to curb greenhouse gas emissions. "On June 18, we plan to carry out nonviolent direct action to ensure Heathrow Authorities close the airport for the day, to create a'pause' in recognition of the genocidal impact of high carbon activities, such as flying, upon the natural world," Extinction Rebellion said in a statement late on Thursday. "This is not about targeting the public, but holding the Government to their duty to take leadership on the climate and ecological emergency," the group said. Heathrow Airport said the use of drones would be a "reckless action."

Gatwick drone attack could have been inside job, say police

The drone attack that brought Gatwick airport to a standstill last December could have been an "inside job", according to police, who said the perpetrator may have been operating the drone from within the airport. Sussex police told BBC Panorama that the fact an insider may have been behind the attack was "treated as a credible line of enquiry from the earliest stages of the police response". Gatwick's chief operating officer, Chris Woodroofe, believes the perpetrator was familiar with the airport's operational procedures and had a clear view of the runway or possibly infiltrated its communication network. "It was clear that the drone operators had a link into what was going on at the airport," he told Panorama, in his first interview since the incident. He said the culprit had carefully picked a drone that would remain undetected by the airport's DJI Aeroscope detection system being tested at the time.