The economics of artificial intelligence

The brain is a generator of automatisms, which allow us to do things even though we can't explain how we do them. The goalkeeper who dives to clear that ball in the corner, the gymnast who throws the ribbon and catches it without looking after several somersaults, the tennis player who connects the passing shot on the run. None of them think about (or know), while executing these movements, the mathematical model or the laws of physics that determine these trajectories, yet nevertheless, based on some basic concepts and millions of repetitions, they are capable of doing them. But sometimes, something happens that truncates that ability. Like Simone Biles at the Tokyo Olympics, sometimes the brain loses its automatisms. 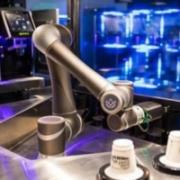 East Japan Railway Co. (JR East) will start testing fully autonomous robotic baristas this December to serve coffee at its Tokyo and Yokohama stations, in a tie-up with a Singaporean retail technology startup. The company said the planned test-marketing involves the Ella robotic barista system developed by Crown Technologies Holding Pte. Ltd., which has had a business partnership with the railway operator since late last year. The unmanned system serves coffee through an automated ordering, serving and cashless payment process. It can serve more than 200 types of blended coffee and allows customers to use dedicated apps and railway-related IC cards for payment. JR East expects the upcoming market research at two of the busiest stations in Japan to pave the way for it to provide loyal customers with customized coffee by using artificial intelligence analysis of their preferences.

In this photo illustration Facebook logo can be seen, Kolkata, India, 28 February, 2020. Facebook ... [ ] Inc on Thursday announced its decision to cancel its annual developer conference due to Coronavirus outbreak according a news media report. Some crisis situations are caused by what people say or do. On occasion, a crisis--or an embarrassing incident--is caused by technology. The New York Times reported yesterday that, "Facebook users who recently watched a video from a British tabloid featuring Black men saw an automated prompt from the social network that asked if they would like to'keep seeing videos about Primates', causing the company to investigate and disable the artificial intelligence-powered feature that pushed the message. "This was clearly an unacceptable error and we disabled the entire topic recommendation feature as soon as we realized this was happening so we could investigate the cause and prevent this from happening again," Facebook spokeswoman Dani Lever said in a statement to USA Today. "As we have said, while we have made improvements to our AI, we know it's not perfect and we have more progress to make," she said. "We apologize to anyone who may have seen these offensive recommendations." This is not the first time that advanced technology has created an embarrassing situation for an organization. The Washington Post reported yesterday that "a judge ruled that Apple will have to continue fighting a lawsuit brought by users in federal court in California, alleging that the company's voice assistant Siri has improperly recorded private conversations." Last week at the Paralympics in Tokyo, Toyota self-driving pods injured a pedestrian. Reuters reported that, "In a YouTube video, Toyota Chief Executive Akio Toyoda apologized for the incident and said he offered to meet the person but was unable to do so.

The number of people who voluntarily give up their driver's licenses has continued to surge in Japan since an older driver struck and killed a mother and her daughter, and injured nine others, in Tokyo in 2019. The driver, Kozo Iizuka, was sentenced Thursday to five years in prison. The 2019 tragedy raised public awareness of accidents involving older drivers. The number of people who voluntarily surrendered their driver's licenses in 2019 rose by about 180,000 from the previous year to a record of about 600,000, according to data compiled by the National Police Agency. Drivers age 75 or older accounted for around 60% of the total.

Toyota's e-Palette is back in service. As Roadshow reports, the automaker has resumed use of its self-driving shuttle at the Paralympic Games in Tokyo following a collision with a visually impaired athlete. Not surprisingly, both Toyota and the games' Organizing Committee have made changes in light of the crash -- they've determined that both the autonomous vehicle and the circumstances around it were to blame. The company noted there were only two guide people at the intersection where the collision occurred, making it difficult for them to watch all vehicles and pedestrians at the same time. It simply wasn't possible to ensure safety at this signal-free intersection without everyone working together, Toyota said.

In a statement late on Monday Toyota said: "The vehicle's sensor detected the pedestrian crossing and activated the automatic brake, and the operator also activated the emergency brake. The vehicle and pedestrians, however, came into contact before it came to a complete halt."

Toyota Motor Corp. said on Monday it would resume operations of its self-driving e-Palette pods at the athletes village for the Tokyo Paralympics with greater operator control and more safety staff to ensure they do not hit any more people. The e-Palettes were halted after one of the vehicles collided with and injured a visually impaired Japanese athlete at a junction last week, prompting an apology from Toyota Chief Executive Akio Toyoda. "The vehicle's sensor detected the pedestrian crossing and activated the automatic brake, and the operator also activated the emergency brake. The vehicle and pedestrians, however, came into contact before it came to a complete halt," Toyota said in a statement Monday. Aramitsu Kitazono was not seriously injured in the incident, but had to pull out of the judo event on Saturday because of cuts and bruises, further embarrassing the company, which along with other global automakers is trying to develop autonomous vehicles that can operate safely on public roads.

Toyota has apologised for the "overconfidence" of a self-driving bus after it ran over a Paralympic judoka in the athletes' village and said it would temporarily suspend the service. The Japanese athlete, Aramitsu Kitazono, will be unable to compete in his 81kg category this weekend after being left with cuts and bruises following the impact with the "e-Palette" vehicle. His injuries prompted a personal intervention from the president of Toyota, Akio Toyoda. As part of its sponsorship of Tokyo 2020, Toyota has been showcasing its autonomous vehicles via a shuttle service, which has been running around the clock in the athletes' village. On Thursday, however, one of the buses pulled away from a T-junction and drove through a pedestrian crossing while Kitazono, a visually impaired athlete, was walking across.

Four days into the Tokyo Paralympic Games, Toyota removed its self-driving e-Palette vehicles from the event following a collision with a pedestrian. The automaker made the decision Friday, according to Reuters, a day after one of the pods hit a visually impaired athlete who was walking nearby. According to a video statement from Toyota CEO Akio Toyoda, reported in English by Reuters, the vehicle had stopped at a junction and was about to turn under manual control from an onboard operator when it hit the pedestrian at one or two kilometers-per-hour. The identity of the athlete has not been released to the public. Toyota first announced its plans to deploy e-Palettes at the games in October 2019, before the coronavirus pandemic forced the organizers of the Olympics to delay the 2020 games by a year.